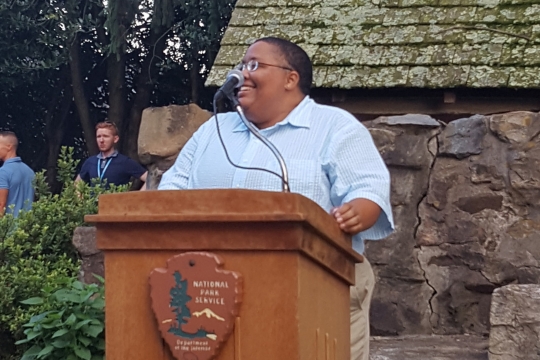 For years Tolonda Henderson, instruction & reference librarian, has been GW’s resident Harry Potter scholar, researching and writing on many aspects of the Harry Potter series of books and movies, including the role of libraries and librarians. Although Henderson has written and presented extensively on the world of Harry Potter, this summer brought a new way to share this work — a pre-performance discussion of Harry Potter and the Sorcerer’s Stone at Wolf Trap National Park for the Performing Arts.

With an audience of enthusiastic “Potterheads,” Henderson and conductor Emil de Cou discussed the body of scholarship on Harry Potter as well as the particular challenges of playing live music with a film. Henderson highlighted how others can turn popular culture interests into academic topics. Addressing topics such as how one comes to study the franchise and where to find Harry Potter scholarship, Henderson took several questions from the audience.

“It was great to have access to another slice of the public,” said Henderson, “to share my passion for bringing scholarship to bear on the tale of the boy who lived.”

Henderson continues serious research on the world of Harry Potter. Henderson presented work on monuments and memorials in Harry Potter at the sixth annual Harry Potter Conference in October 2017. Henderson’s work can also be found in a chapter titled, “I Don’t Think You’re a Waste of Space:” Redemption, activity, and the social construct of fatness for a book being released in 2018.