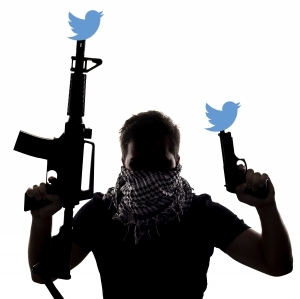 The Islamic State, also known as ISIS and ISIL, relies heavily on social media to recruit fresh volunteers to its cause, disseminate propaganda, and call for attacks. But governments and major technology companies attempt to take down their posts as quickly as possible, making one of the greatest problems facing researchers studying their social media messages the need for that information’s instantaneous capture.

When GW’s Program on Extremism, experts providing analysis on and solutions to violent and non-violent extremism, was faced with this sticky problem, they turned to Dan Kerchner, senior software developer, and the Scholarly Technology Group of GW Libraries and Academic Innovation.

“Even though our team has subject-matter expertise, we lack the technical skills to transform the data set into policy recommendations,” says Audrey Alexander, a research fellow with the Program on Extremism. “In this capacity, Dan remains invaluable to the Program on Extremism because of his willingness to problem-solve and bridge the gap between social science and computer science. He has been instrumental in developing the Social Feed Manager, the tool we use to scrape content from Twitter accounts in our database of IS-sympathizers.”

The immediate and automated capture of social media information is exactly what the Social Feed Manager was created to do. It automates the data collection from accounts that the Program on Extremism has identified as pro-Islamic State, ensuring that data is captured for study before it is removed to prevent its spread. In addition, the Scholarly Technology Group connected the Program on Extremism with other tools that allow navigation of the content for substantive analysis.

The Social Feed Manager is open source software created by the Scholarly Technology Group, funded by grants from the Institute of Museum and Library Services, the Council on East Asian Libraries, and the National Archives’ National Historical Publications and Records Commission, to harvest social media data and web resources from free public sources on a number of platforms, including Twitter, Tumblr, Flickr, and Sina Weibo.

With the help of the Scholarly Technology Group, the Program on Extremism has built a one-of-a-kind collection of content from English-language Islamic State sympathizers on Twitter, allowing them to conduct research and produce the sort of compelling policy recommendations that can inform and inspire both government officials and the general public. On October 26, 2017, the program released their latest report, Digital Decay: Tracing Change Over Time Among English-language Islamic State Sympathizers on Twitter. “[This report] is one of the biggest projects we’ve ever completed at the Program on Extremism,” continued Alexander. “The data set offered innumerable opportunities for robust analysis. We couldn’t have done the project without the Scholarly Technology Group and the results have very real implications in the realm of countering the Islamic State online.”