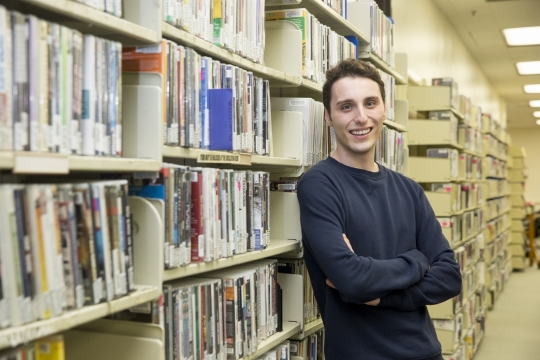 Lost in Gelman Library one day, David Lange, ESIA ‘19, stumbled upon GW Libraries’ video and media collection. “Now we really should just do it,” he said of the discovery.

The “it” was using film to explore the history and culture of LGBTQ people. Lange was a few months away from establishing a GW colony of Delta Lambda Phi (DLP), a fraternity for gay, bisexual, transgender, and progressive men. “It’s about wanting to explore your own identity with people who can really understand you and have been there and know what you’re going through,” he says of founding DLP at GW.

He and his friends had been discussing ways to provide a space for men to better understand their identity, as well as queer history. “A lot of our members are from families or regions that might not really have a strong gay cultural scene,” he says.

Lange’s idea was to look at film and television to spark discussions and conversations. However, streaming platforms don’t have a large selection of classic LGBTQ films.

“Netflix is limited, especially some of the older movies, like [The] Celluloid Closet, are not available,” says Lange. GW Libraries’ collection greatly expands Lange’s options for exploring queer history through film. “It’s prompted a greater appreciation for where we’ve come from, as a community, and where we’re going,” he says. “We have a whole story and whole culture and beautiful history we can be proud of.”

“I think it’s been very successful,” Lange says of using film to explore identity with his brothers. “I think it’s made people feel a lot more like a part of a community, and community building is what a fraternity is all about.”